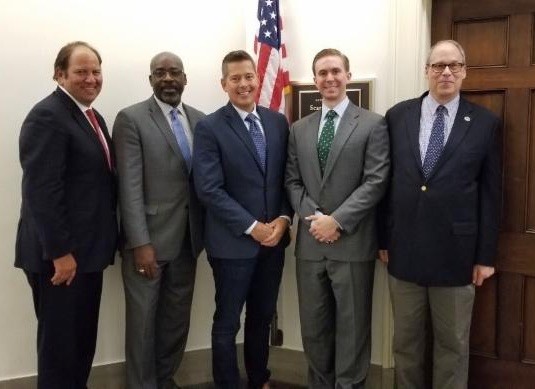 JACKSONVILLE, Fla. - Floridant -- The National ATM Council, Inc. (NAC) has wrapped up its third annual Washington DC fly in - "ATMs Go to Washington III" – which took place July 23-24 in our nation's Capital.  The event attracted the participation of more than 50 ATM entrepreneurs and suppliers from every major market in the country. NAC estimates its DC delegation represented one out of every two ATMs now in service across America. Easily surpassing last year's schedule, the recent two-day lobbying effort included close to 60 meetings with federal lawmakers and their staffs. As NAC representatives noted, the meetings centered on members of the influential U.S. Senate Banking and House Financial Services Committees.

"This year's fly in attracted the most ever participants and also encompassed the largest coordinated set of Congressional meetings ever conducted by the US Independent/Retail ATM industry," said Bruce Renard, NAC's Executive Director. "Our ATM delegation included not only representatives from the largest ATM providers in the nation, but also significant numbers of the smaller entrepreneurial ATM providers that form the heart of our industry."

As Renard noted, "lawmakers have begun taking notice of this industry sector and the vital role it plays in communities across the country. It was clear our prior fly ins and meetings with members of the Banking and Financial Services Committees have succeeded in raising positive awareness of the important contribution Independent/Retail ATMs make to our consumer-spending based US economy."

More on The Floridant
The NAC delegation arrived on Capitol Hill with a tightly focused agenda, which included expressing support for maintaining a cash payment option for US consumers. Although a number of cities and states, including New Jersey and Philadelphia, have already passed or are considering legislation to ensure continued cash acceptance at retail/public venues in the US, a uniform national policy is preferable in NAC's view – and will avoid a piecemeal approach to the important issue of assuring US currency's continued validity as legal tender nationwide. Two similar bills on this subject have been introduced in the US House of Representatives, and NAC is hopeful Congress will soon pass bipartisan legislation to establish clear and cohesive national policy on the issue.

"We are hopeful that support for continued consumer choice to pay with US currency at retail in America will continue to emerge on both sides of the aisle in Congress," Renard said. "It's never easy to pass legislation in today's highly charged political climate, but we feel certain that, regardless of party affiliation, maintaining the validity of cash as a payment option for consumers throughout the US is a public policy that will continue to be embraced broadly as an important national imperative going forward."

NAC representatives were also encouraged by progress made during the fly in on the association's other major industry issue, involving the continuing epidemic of unfounded bank account closures impacting our nation's ATM businesses. Also raised during prior NAC fly ins, this issue continues to plague lawful and legitimate ATM businesses across the country.  A grim echo of Operation Choke Point, which was supposed to have ended in 2017, the bank account blacklisting and "de-risking" of ATM companies continue to threaten the livelihoods of ATM deployers nationwide.

More on The Floridant
"NAC's efforts are unrelenting in seeking to restore reasonable access to the US banking system for America's ATM entrepreneurs," said NAC Chair and Access One CEO, George Sarantopoulos. "I'm glad to say we're seeing some traction and commitment by national policymakers to address the issue.  In fact, our problem was the subject of pointed questioning to prominent bank CEOs during hearings held by the House Financial Services Committee the same week as our fly in."

"Although ATM company bank account closures/denials have not received the same level of public attention as preserving a cash payment option for consumers, bank account blacklisting of ATM companies remains a threat to continued widespread convenient access to cash in America and must be stopped," said Sarantopoulos.

Filed Under: Business, Finance, Non-profit
0 Comments
Latest on The Floridant