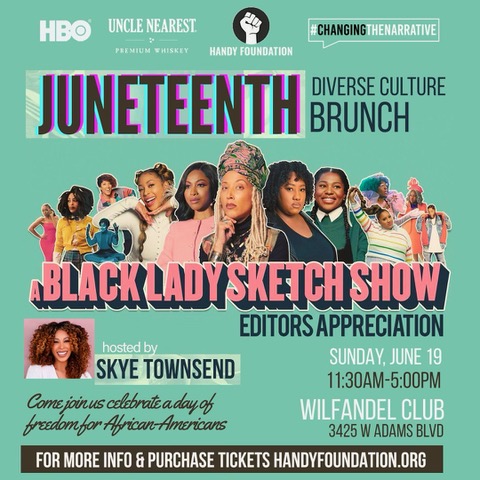 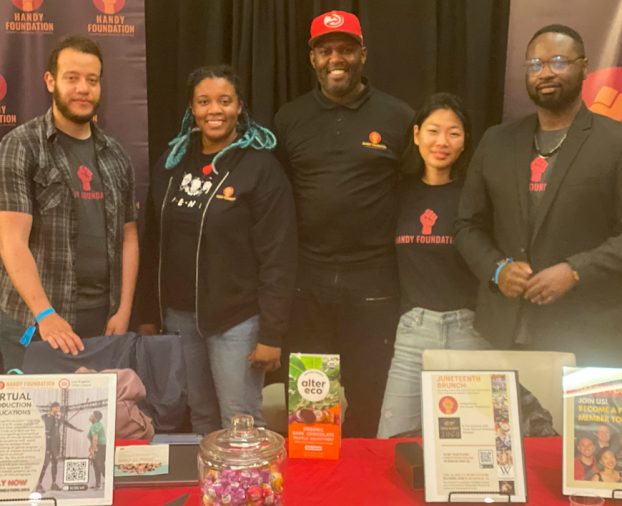 An Upcoming Handy Foundation Event on Juneteenth will Celebrate the Editors of A Black Lady Sketch Show, Highlight Opportunities Created and Discuss State of the Industry 2 Years Later
LOS ANGELES - Floridant -- The Handy Foundation is hosting an inaugural event this Sunday, June 19, 2022 in celebration of Juneteenth with the first Diverse Culture Brunch. The event will highlight the work of the Handy Foundation to create pathways to opportunities for multicultural professionals in Hollywood over the past two years and honor the diversity and inclusion of the editing team behind A Black Lady Sketch Show, made up of Bradinn French, Taylor Mason, S. Robyn Wilson, and Stephanie Filo. ABLSS has historically featured and highlighted Black, queer content that is culturally relevant and well represented.

The event will take place at the Wilfandel Club from 11:30AM - 5:00PM PST, featuring a spades tournament and will be hosted by actress Skye Townsend.  Proceeds benefit the work of the Handy Foundation and interested attendees can register at HandyFoundation.org.

"I am so excited to feature the talented editors of A Black Lady Sketch Show for our 2 year anniversary event. It is urgent that we create options for a clear pathway to these jobs based on merit and not just who you know. It will require the help of studios, networks and workforce development organizations." noted Ri-Karlo. "We are excited to celebrate our progress, but continue to look ahead and find ways to create a more equitable Hollywood."

Two years ago on June 16, 2020 Ri-Karlo Handy posted on a private Facebook group titled, 'I NEED AN EDITOR!'. Little did he know that his post would spark a firestorm across Facebook, and become a catalyst for a much larger industry shift. His search for a Black Editor during the height of the Black Lives Matter movement incited a multitude of comments claiming that the post was reverse racism, excluding his white counterparts from the job opportunity. The post simply read, "Looking for Black Union Editors, please DM me." That single sentence led to a viral conversation around the very blatant need for equity in the entertainment industry. The screenshots of dozens of those comments were shared via Twitter by Attorney Nicole French, leading to important dialogue on industry equity.

More on The Floridant
Reflecting on that moment, near the two year anniversary, the impact has not only changed Ri-Karlo's life but it's also touched the lives of so many others. His simple search shed light on the very disturbing reality of the TV and Film space, where less than 5% of unionized below the line staff were Black. Days after the initial incident, Ri-Karlo released the first 'Black Editors List,' featuring hundreds of Black TV/Film Editors. That list was downloaded by nearly 2,000 hiring managers across every major Hollywood production studio. Not only was there a need for resources to expose the work of Black editors, but struggling to meet their internal diversity goals, the companies were also looking for solutions. Despite new diversity lists and committees developing at unions, studios, production companies and networks, none of these solutions address the systemic barriers for new talent entering the Hollywood workforce, and with the same gatekeepers in place, their impact is patchy and slow.

As it became clear that more sustainable solutions were needed, the Handy Foundation was launched to develop and oversee workforce development programs for Hollywood's below the line workers, starting with the highest turnover job in post-production, the Assistant Editor.

Working with Los Angeles Urban League and the Editors Guild, IATSE Local 700, The Handy Foundation launched an apprentice editors training program, the first for unscripted and scripted television to maximize the opportunities for job placement. To date, the Handy Foundation has partnered with ITV, IPC, Fremantle, Original Productions, 44 Blue, Critical Content, Warner Horizon, Bunim Murray, Tinopolis and is currently piloting a program with Netflix with their unscripted Post Production team.

Since launching the program in 2020, The Handy Foundation has trained and placed 80 first-time BIPOC assistant and apprentice editors on television shows like Snowpiercer, BMF, Acapulco, The Bachelor, America's Got Talent, American Gangster Trap Queens, Seleena and Chef, and the recently released feature film Valet to name a few.

More on The Floridant
The Handy Foundation was also excited to see that a couple of the editors from the list they created and shared with the industry went on to win Emmys for their work, including Stephanie Filo for A Black Lady Sketch Show and Ikpemoghena Ikharo for Sesame Street: The Power of We.

Creating merit-based pathways for people from underserved communities into all areas of television and film tradecraft has become a personal mission for Handy. Looking back on his own career, Ri-Karlo was just 14 years old when he took a TV production class. That one class was his sole formal training, and he was able to put those skills to use, going on to direct music videos and edit television shows like Fox's Hell's Kitchen, as well as  executive produce shows for both BET and MTV. Mastering technical film and television skills is a major key to a sustainable career in Hollywood– but television trade schools to certify and place workers with the skills needed most, such as script supervision, digital imaging, mastering virtual production software, unscripted Avid workflows, and online or turnovers for finishing, still don't exist. Creating pathways like these and providing access to a formative training space is the focus of the team at The Handy Foundation.

To help create a community of like minded organizations, the Handy Foundation has also launched the Diverse Culture Coalition to help build toward its vision of a merit based, equitable Hollywood with equal access to a sustainable career pathway for all.

For more information on the event and the Handy Foundation, please visit HandyFoundation.org.