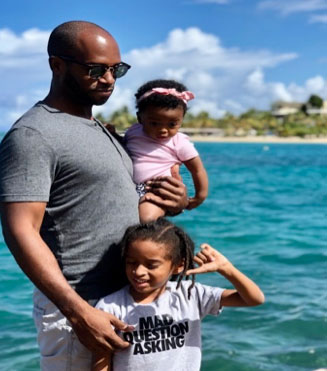 A Role Model For Positive Social, Emotional, and Educational Values
MIAMI - Floridant -- The Most Valuable Father Award Winner for summer has been announced by Holly Zwerling, LMFT, LCSW, Founder, President, and CEO of the Fatherhood Task Force of South Florida. The criteria for the Award are for Fathers to be involved in their child's life; support and nurture them; interact in their education, play, and activities; and to be a role model for positive values by guiding and supporting them socially and emotionally.

Chef Cory White is a New Jersey-born chef who has made his professional imprint in fine dining in NYC, Miami, and the Islands but he is most proud of his role as a father.

The following is an excerpt from an interview with Cory White by Holly Zwerling. The complete interview can be seen on the Fatherhood Task Force website http://www.ftfsf.org

What does it mean to you to be a father?

A father to me should be a good example for his child, be present, lead by example, be nurturing, understanding, and responsible. These are simple words but speak volumes when I think about being around children. Being a father means being thoughtful about what I say and how I treat children. I am aware that I am raising a child who is going out in the world and I want my children to be decent human beings. I don't focus on being rich or driving fancy cars; riches will come from being a good human being.

I grew up basically in an all-white neighborhood. From the time I was in K-6 there were only two African-American kids in the school, me and my older brother.  My grandmother was married to a Polish gentleman who I knew to be my grandfather and raised us as his own; my early experiences shaped me in a way that I am comfortable being around all cultures and later working in fine dining I often was the only African-American chef.  I am hyper-aware of who I am and proud of my race and my heritage but I don't have discomfort being around other cultures. Race was never an issue; no matter who you were you were welcomed in our home, we were welcomed where we were. I am grateful for that as it had a profound effect on me.

Tell us about your children.

My son age 6 is brilliant; he taught himself to read at about 3, his memory is like an elephant; he is book smart. My daughter is almost two. She is intuitive, sweet, sharing, a kind little girl, loves her brother immensely, and is very athletic.

More on The Floridant
What values are important to you in raising your children?

I need to facilitate their strengths and character building. Economics plays a part in how you raise your children. If I had more money, I would travel with them to see the world and expose them to different cultures. I try to do a lot locally and when we're in New York take them to different areas in the city. Values are important to me. When you are kind to others, that will take you far in life. Your children may not understand now but they will understand as they grow. It will matter more than the salary you make. That will sustain them. It's important to me how they treat each other. It takes practice but we can't expect them to treat others kindly if they don't treat each other kindly.

What can fathers do to raise their children's sense of security and confidence beginning from birth?

Fathers need to be present…it doesn't mean they need to be in the same space but be aware of their actions and their behavior and consider the example they are setting.  Be someone they can look up to. I did not get that connection with my Dad; he's a great man but he didn't have a father himself to learn how to be a father. He was more like a friend.  You need to be there mentally not just physically. Before entering a nursing home, my Dad lived with me for a few years and that was the closest time we had together.

Why did you volunteer for your child's school for the Miami-Dade County Public School's Virtual Fathers in Education Week or in general?  Why is that important and how does it make you feel?

It's important to volunteer for your child's school; I produced a cooking demonstration for the children and it felt very good. One day I want my son to be present in his child's life. I am setting an example. I want to do the right thing to pass that on to my children. When my children know that I will be there that starts that bond of security.

As a father considering your occupation as a chef what unique skills do you utilize in the interaction with your children? What impact do you think you have in the community?

Food is very important in our household. I use food as a tool to help my children understand culture. I don't just cook different dishes we talk about them.  I speak to my children as I speak to an adult. I don't dumb down to our children. That is why my son is doing so well in school. We don't want to teach our children things they have to unlearn. I recently produced a cooking demonstration for the children in my son's school to give back to the school community hoping to invite other fathers too.

More on The Floridant
What are your thoughts on how you can encourage other fathers and male role models to get more involved with their families and their community?

It's important to connect with other fathers to see where they are and have conversations with them. They may have an issue about getting involved. I would love to speak with them and stress that getting involved builds a legacy of helping others. You pass on to your son and daughter the importance of being present in their lives, being aware that they need you and break cycles. Talking with someone like me who didn't have that relationship with his father; it would be more personal and genuine.

How do you remain an engaged father during COVID19? What new challenges and opportunities do fathers have with their children during this time?

It is about social economics. In general, fathers may not be able to do all that they want for their children because they work crazy hours and may not have time. But now with COVID19 fathers may be experiencing depression with concerns about paying bills, how and when they are going to be able to re-enter the workforce. I try to keep a happy face for my kids; when I feel down I try to play with them.  It's rough because being idle is not what I'm used to so I have to find ways to keep my stamina like talking with someone. I don't want my ups and downs to have a long-lasting effect on my children.  Fathers have to be aware of how lashing out at their families and kids is not what they deserve. The tough times will pass. Children are going through a lot. Some men are not good at expressing their emotions because they don't want to burden others but this is not good for children or relationships if their fathers are not present for them. I encourage my children to talk about their emotions freely as I don't have machismo ideas about being sad or crying. We fathers need to do the same so we will be there for our children.

What ideas do you have for fathers to remain involved with their children when they live apart?

When fathers live apart they should FaceTime and have every-day conversations and engage with their children,  call them to find out how their day was, and let them know you are thinking of them. It gives them a needed sense of security and bridges the distance to know you are present in their lives.

An advocacy organization with national influence, the Fatherhood Task Force's mission is to facilitate the involvement of fathers in children's lives by developing and promoting programs for fathers, grandfathers, uncles, and male mentors/role models related to all stages of parenthood. The Fatherhood Task Force will be holding a 10th Anniversary Virtual Conference " A Sharp Focus on Fathers' Impact on Youth " on September 25, 2020.