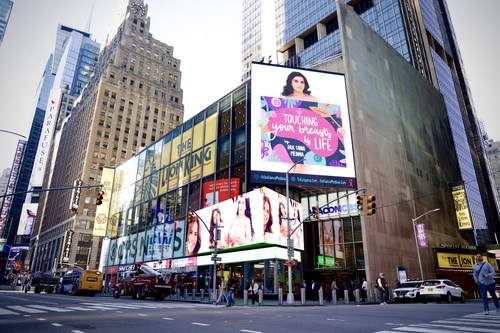 MIAMI, Oct. 22, 2021 /PRNewswire-HISPANIC PR WIRE/ -- For breast cancer awareness month, a group of influencers headed up by Dr. Tania Medina, a renowned Dominican plastic surgeon, Carlos Ponce, Karina Banda, Ingrid Macher and Dr. Pablo García, teamed up in the US with the message "Touching your breasts is life."

"Our goal is to raise awareness about the importance of learning how to do breast self-exams. I especially wanted to invite Carlos Ponce and Dr. Pablo García for them to take this message to men, since this kind of cancer can affect them too," said Dr. Tania Medina.

She also invited Karina Banda and Ingrid Macher, both remarkable women in their own right. Karina, for her charisma, and Ingrid for being a breast cancer survivor.

The influencers capped off their campaign with the unveiling of a three-sided billboard on Broadway in Times Square.

"We send this message to the world from the most iconic street in New York, this year especially with men in mind," explained Dr. Pablo Medina.

The male version is a rare cancer that forms in the breast tissue. It's most common in older men, though it can develop at any age. One of every hundred men may suffer from it. Men diagnosed at an early stage are very likely to be cured.

More on The Floridant
Symptoms of male breast cancer:

-A painless lump or thickening

-Changes to the skin covering the breast, such as dimpling, puckering, redness or scaling

-Changes to the nipple, such as redness or scaling, or a nipple that begins to turn inward

About Dr. Pablo García: Author of the bestseller "Soy más que mi balanza," specialist in bariatric and laparoscopic surgery. Over 10 years of experience in weight loss. Featured in media and a special guest at congresses and training events. Instagram @doctorbariatrica